The ReSTOR multifocal intraocular lens (IOL) is a revolutionary lens implant for the eye which can help correct distance, intermediate, as well as near vision. This lens can be implanted in patients who will undergo either cataract surgery or refractive surgery. In certain larger markets, this technique has even surpassed the use of LASIK and the accomodating IOL’s as a means to surgically correct the vision. The Toric intraocular lens (IOL) is another revolutionary lens implant which corrects astigmatism.

At least 80-90% of the ReSTOR IOL and the Toric IOL patients will be spectacle-free after eye surgery, with the result including a full range of quality vision from near to distance. These new revolutionary lens implants have been used at the Cohlmia Eye Center since its FDA approval on cataract surgery patients as well as RLE (refractive lens exchange) patients. The results so far have been extremely encouraging.

The AcrySof® Natural intraocular lens implant is an acrylic eye lens, manufactured by Alcon, which received FDA approval for surgical use in September of 2003.

This intraocular lens, as opposed to all the others, not only blocks ultraviolet light from damaging the retina, but more importantly, blocks blue light as well. Blue light has been shown to cause progressive damage to the retina and further macular degeneration. The AcrySof® Natural lens, however, has been shown to slow down that degeneration. Unfortunately, blue light is not only a product of sunlight, but also of ambient home and/or office lighting.

The intraocular lens is implanted in the eye at the same time the natural lens of the eye is removed, as in cataract surgery, for instance. It is very safe to implant and causes no distortion of color. In fact, it enhances contrast sensitivity and decreases glare and halos at night. This intraocular lens is used exclusively at the Cohlmia Eye Center. 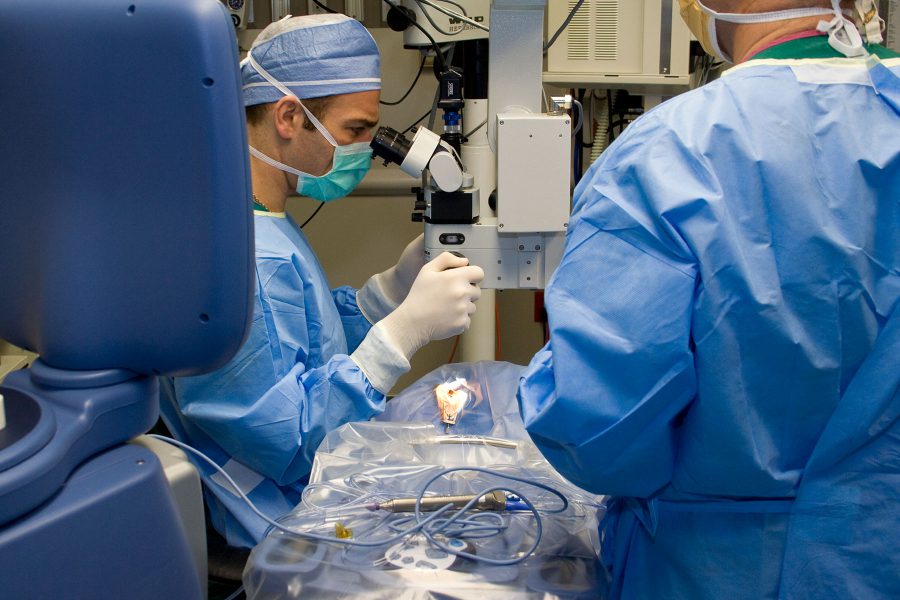 "Very professional and efficient. Staff is friendly and helpful. Trust him absolutely with my eyes and did a great job with my surgeries."

"My family and I have been going to Dr. Cohlmia for years. He is the absolute best, and the level of care from him and his staff is second to none!"

"Wonderful staff. Very pleasant and most helpful. Dr. Cohlmia takes time to explain everything. We have both been very pleased with him. He is an exceptional Doctor."