Retina Scan May Give Early Warning of Alzheimer’s Disease

Retina Scan May Give Early Warning of Alzheimer’s Disease 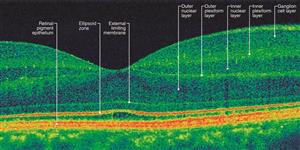 A new study shows that an eye scan may be a relatively easy, inexpensive way to test for early Alzheimer’s disease. The study builds on research showing that closely examining the retina might help detect Alzheimer’s in its early stages. The retina is made up of brain tissue. Retinas are connected to the brain via the optic nerve. Changes in the brain from dementia, including Alzheimer’s, can also show up in the retina.

In a small study, researchers at Washington University in St. Louis identified about 30 people with no signs of Alzheimer’s. They then tested all of these people with two ways of measuring biological changes associated with the disease. One is a PET scan of the brain. The other is an examination of spinal fluid. A little more than half of the people tested showed no signs of Alzheimer’s in the biological tests. The others had biological signs or markers of the disease. These markers are proteins or clusters of proteins found in the brains of people with Alzheimer’s.

Next, the researchers scanned the eyes of everyone in the study. They used a scan called optical coherence tomographic angiography (OCTA), which creates a detailed cross-section of the retina. OCTA scanning can map blood vessels in the retina. They found changes in the retinas of the people who also had biological signs of Alzheimer’s. The people without Alzheimer’s markers had normal retinas. The biological tests for Alzheimer’s, looking at spinal fluid or a brain PET scan, are complicated, expensive, and pose risks for patients. They are rarely used to diagnose the condition.

Most Alzheimer’s is diagnosed through memory tests or observing behavior changes. By the time changes in behavior are noticed, the disease can be advanced. While Alzheimer’s has no cure, medications and social programs may slow the disease. Experts are eager to find ways to diagnose Alzheimer’s early.